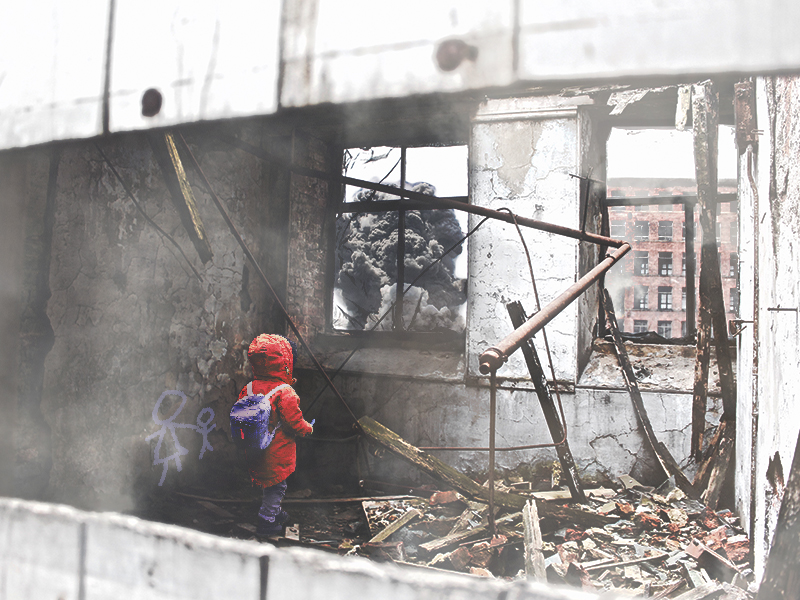 In week seven and eight of Introduction to Digital Imaging I looked at colour and how it can be used to create dynamic and interesting arrangements. I also created a photomontage that incorporated mother and child with a social and political influence.

The tutorials for weeks 7 and 8 brought attention to colour, which will be used in assessment #3. Colour can be defined by primary, secondary, tertiary, complementary and neutral. Not only is colour important in how we identify certain elements, but it is also hugely influential in the way it makes us feel, interact and interpret visual imagery. I will investigate colour and colour theory more closely for assessment #3.

The final exercise for week 7 & 8 was to create a photomontage composition that includes a ‘mother and child‘ and is created with a ‘social, political and/or cultural‘ influence.

My composition is influenced by the destruction of war and the innocent lives that are affected. I wanted to create an image that was haunting and confronting. The child isolated in a war zone with echoes of the mother, drawn on the crumbling wall.

Images were sourced from Unsplash. Each was downsized and converted to 96 ppi or larger.

I started the process by creating a new document to the specified width, height and ppi (I also created a rule of thirds grid). Next, I opened the background image, resizing it and adjusting the ppi. I duplicated the background layer and created a layer mask with the visible area of the first window, which I placed the resized version of the smoke explosion. I repeated the same process for the second window, this time using a smoke image with a clipping mask. After this, I used the image of the child and used the quick selection tool to trace around them. I wanted to use a red colour on the jacket, so I created a hue/saturation adjustment layer that was clipped to the child and modified the yellows. To create further depth I created two brush layers with blend modes for shadows below the child and on the side so the subject would fit in better with the scene. I opened the image with talk and used the quick selection tool to copy a piece of chalk which was resized and placed in the image. This was placed under the child layer and an adjustment layer was used to modify the colour to a purple (matching the backpack). Using the brush tool I created a new layer and selected a rough chalk brush. I began to draw a figure of a mother and child. I selected the layer and modified it to distort the edges to align with the wall. I adjusted the blend mode and opacity to try and replicate the chalk effect and to blend into the image so it was not too intense. Finally, I used an image of smoke which was placed over the composition so far. I adjusted the blend mode and opacity so it would appear to have a smoky effect and moved the darker areas so the subject would be drawn into the viewers eye.