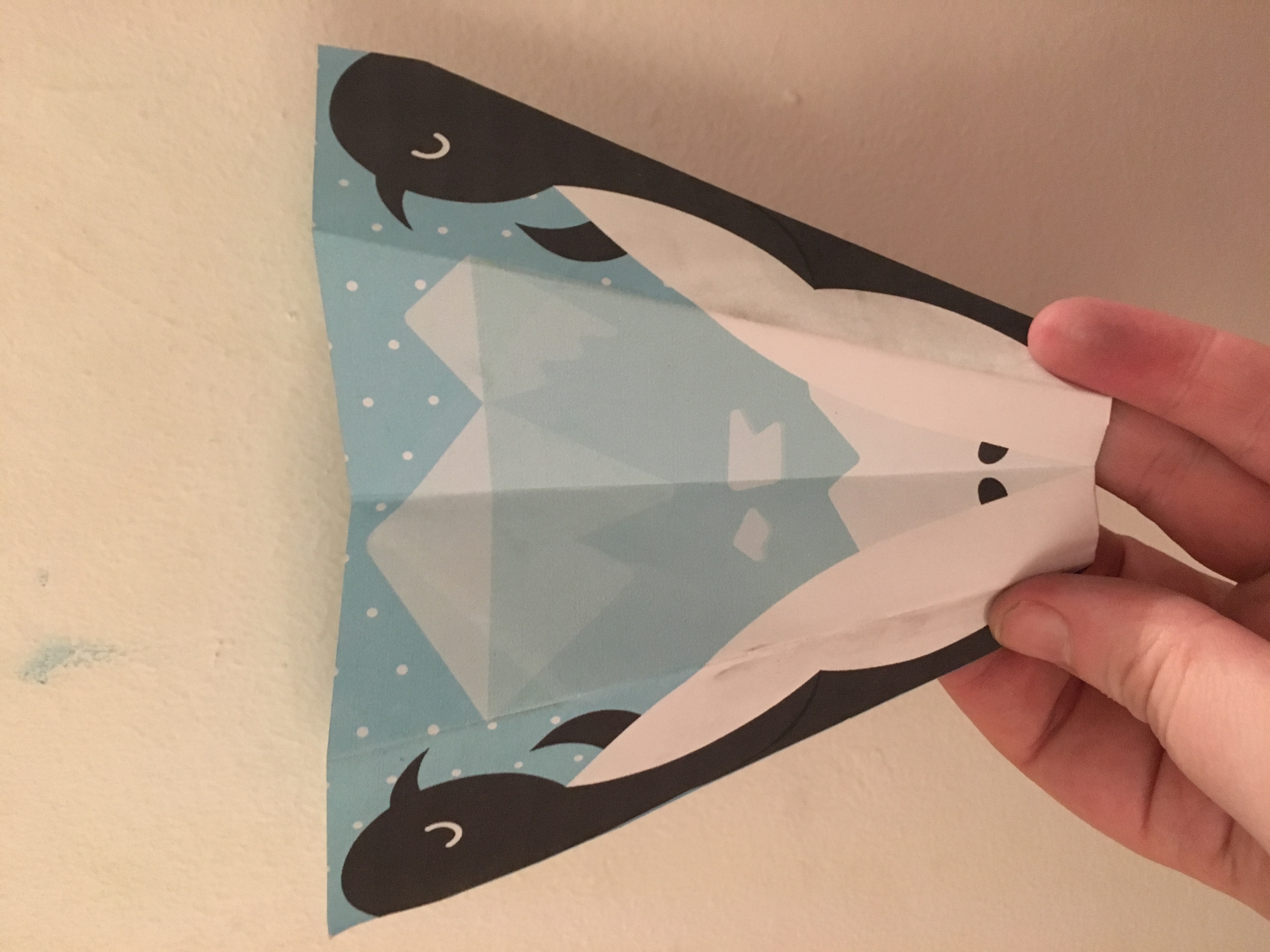 This is an on going post for Digital Design, week 6. I will post my progress throughout the week with the required activities.

As the deadline for first submission for the paper place approaches, it’s time to get into the final refinements and make sure all aspects of the design are coming together.

A look at the current design

You will notice that in the current design examples, I have not placed a background colour behind the main design elements. This is because I have been undecided on what colour to use or how to treat this space. Because it is an area that is unseen in the folded plane, it doesn’t have a use in a 3D model. However, it is visible in the 2D version, and I believe it needs to have some form of activity, to make the whole concept more appealing in it’s flat/2D form.

An aspect of the design that I have not addressed, is the use of colour. This is one point that I should have considered earlier, but at least I am looking at it now. It affects not only the background, but also the main aspects of the design. From my example provided above, you will notice that I have used a lot of blues, with slight variations between water and ice. I want to keep a harmony between these colours, with the bold contrast of the darker shade for the penguins (because they are the star attraction). In an attempt to try and keep a uniform colour with the design in screen and print, I have decided to use the PANTONE colours. 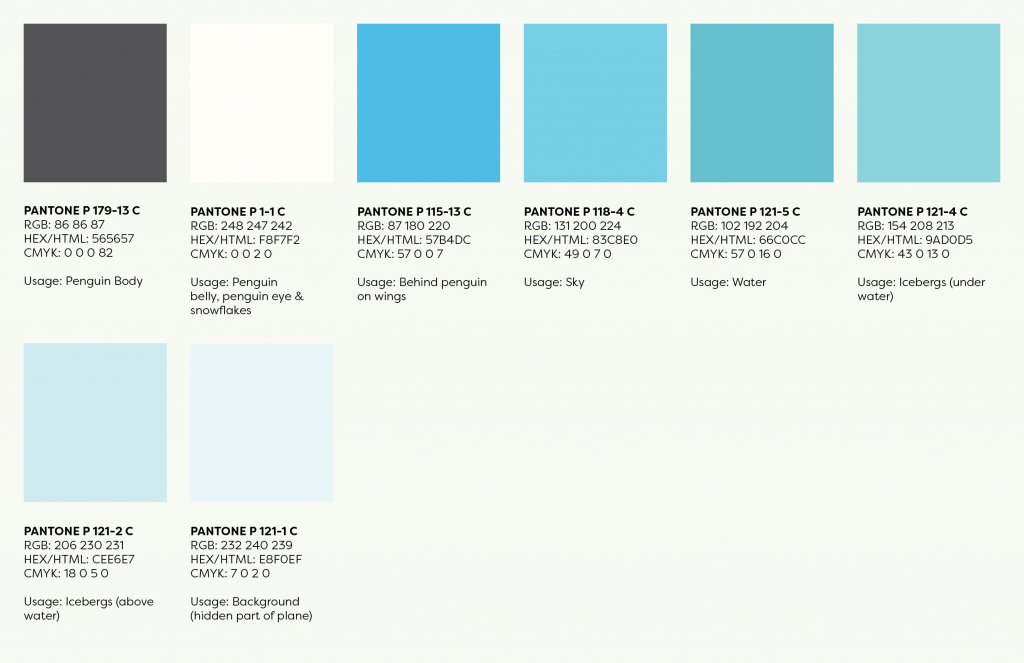 I have decided to increase the brightness of the colours, so that there is more vibrancy in the design and may be easier to recognise certain features. 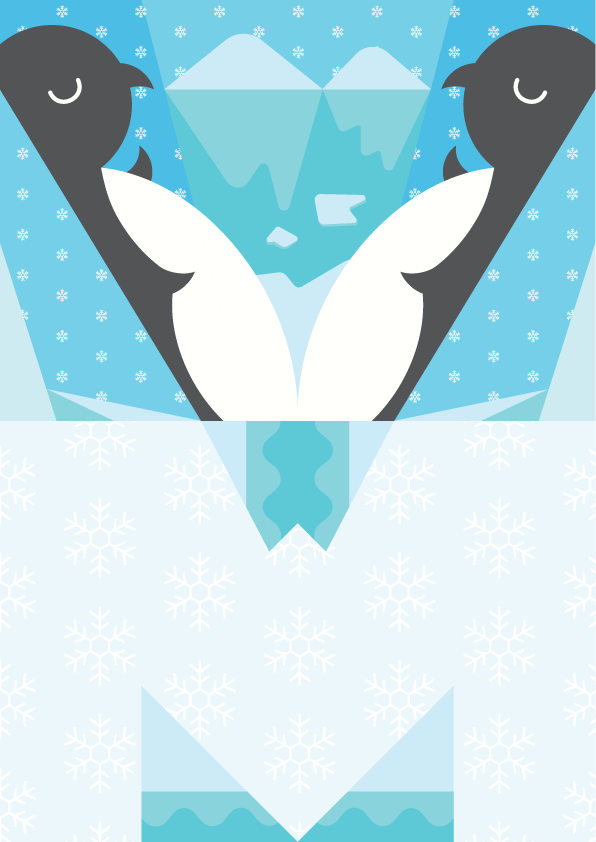 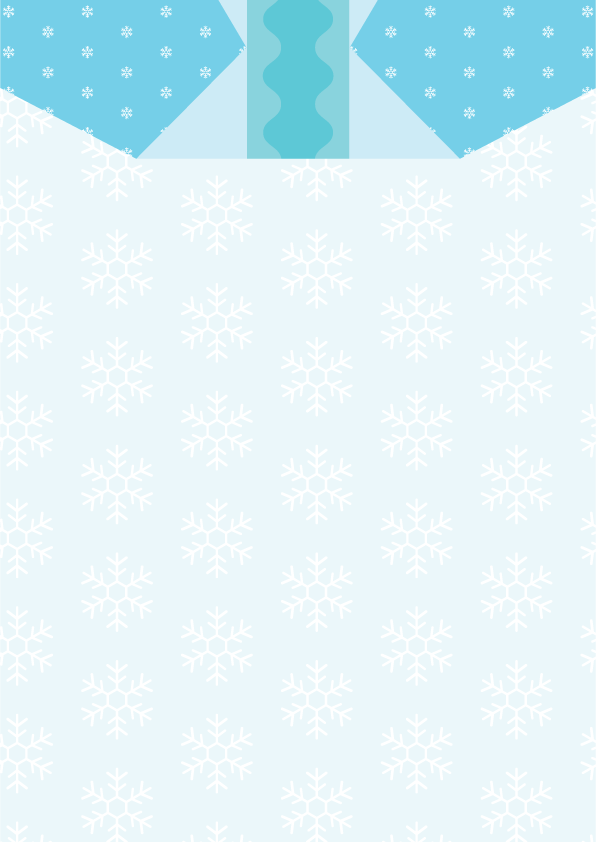 Updates to the folding instructions

Because I updated the colours within the design and finally settled on a background colour and pattern, I had to update the design of the folding instructions. This took a little bit of time, and required a lot of patience working on a smaller scale. I think it should have a good result in the end though! 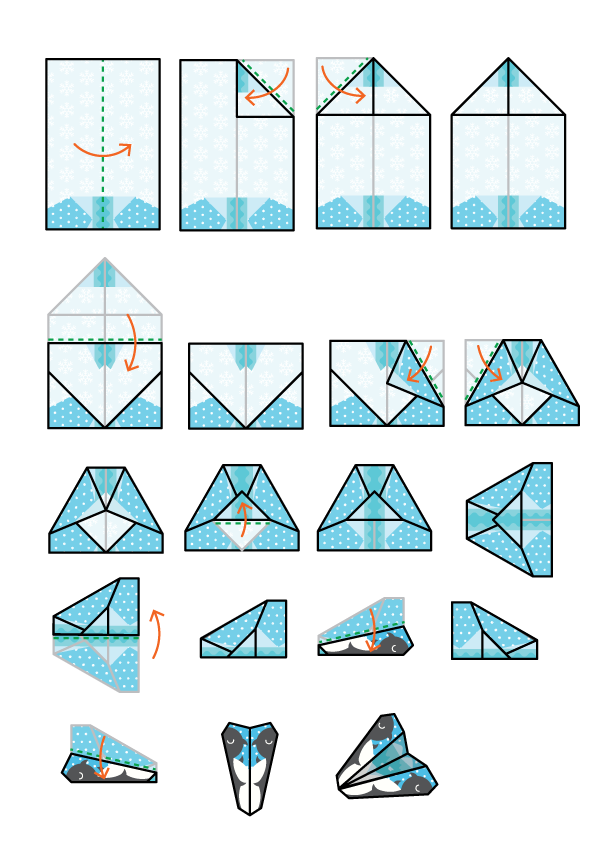 Further refinement of A3 Sheet

Last week, I looked at some layout ideas for the A3 sheet with sketches, consideration of the folding instructions and the creation of some draft layouts. I had mistakenly created these in A3 portrait, which limited the amount of space. Thankfully I believe I am on the right track now, and have switched to landscape!

I decided to explore further some of my ideas that I had previously and created a few draft layout in InDesign. I also wanted to keep the colours that I had used in the design, to have some consistency across the A3 design as well. 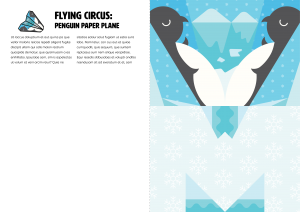 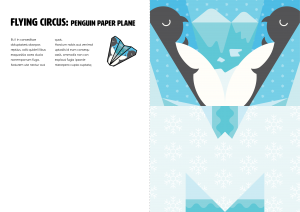 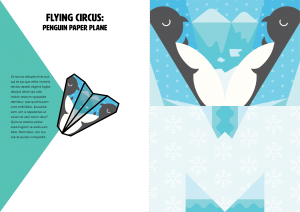 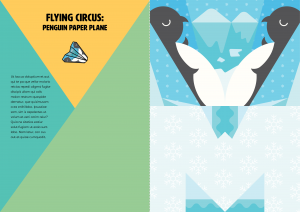 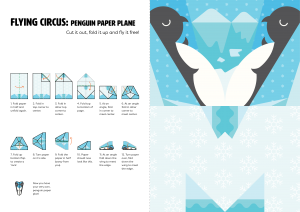 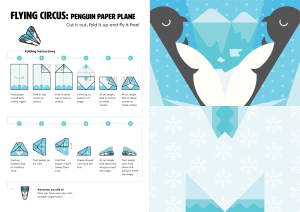 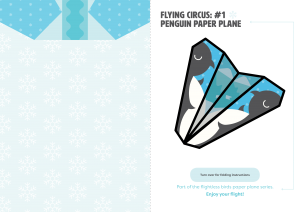 It was during this process of experimentation with the elements, that I also discovered that there were parts of the actual design that were not correctly aligned. I went back into Illustrator and looked at all the elements, making sure that there were not extra anchor points. I also decided to simplify the shapes within the design. Instead of having clipping masks with large areas of unneeded shapes, I used the shape building tool to create exact shapes that intersected with each other. It also made labelling each layer a lot easier, because I had less elements to work with! (Note: In the image below I was also viewing InDesign in preview mode, so the guides and grid are hidden.) 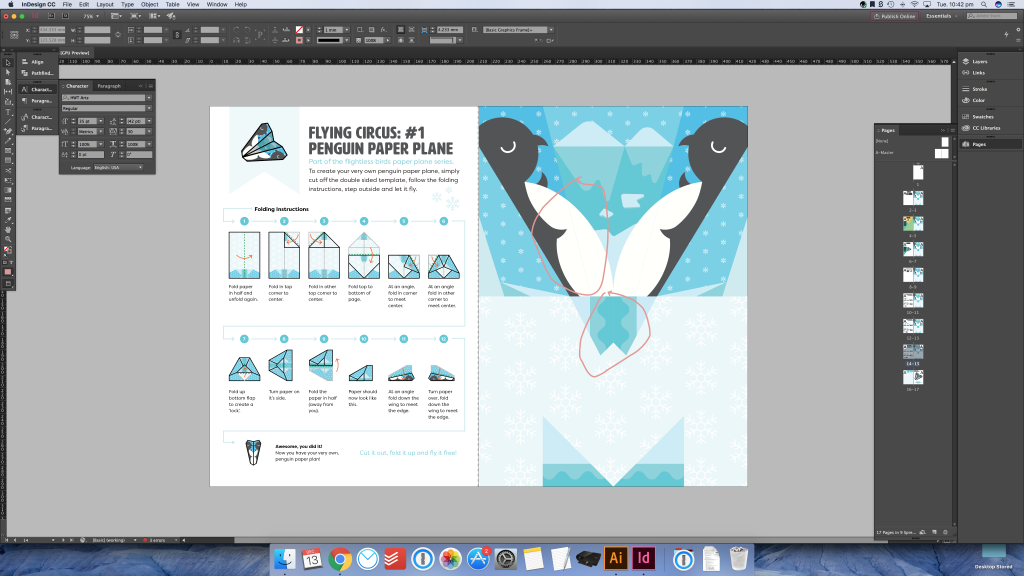 As I was working on the layout and placement of the objects, I wanted there to be structure to the design, while also allowing the viewer to follow along and be guided. For the instructions I used numbers and arrows so you are taken from one step to another. With so many small elements it required a lot of patience and using alignment tools and guides to make sure everything was divided evenly and could be presented in a spatially pleasing way. I do believe that the intro text needs to be revised, and possibly the text included on the bottom right. It might be unnecessary. The layout for the back page may need a bit more refinement (and might be a bit too busy), to make sure that it works. I will seek out some feedback and further exploration and see where it leads. 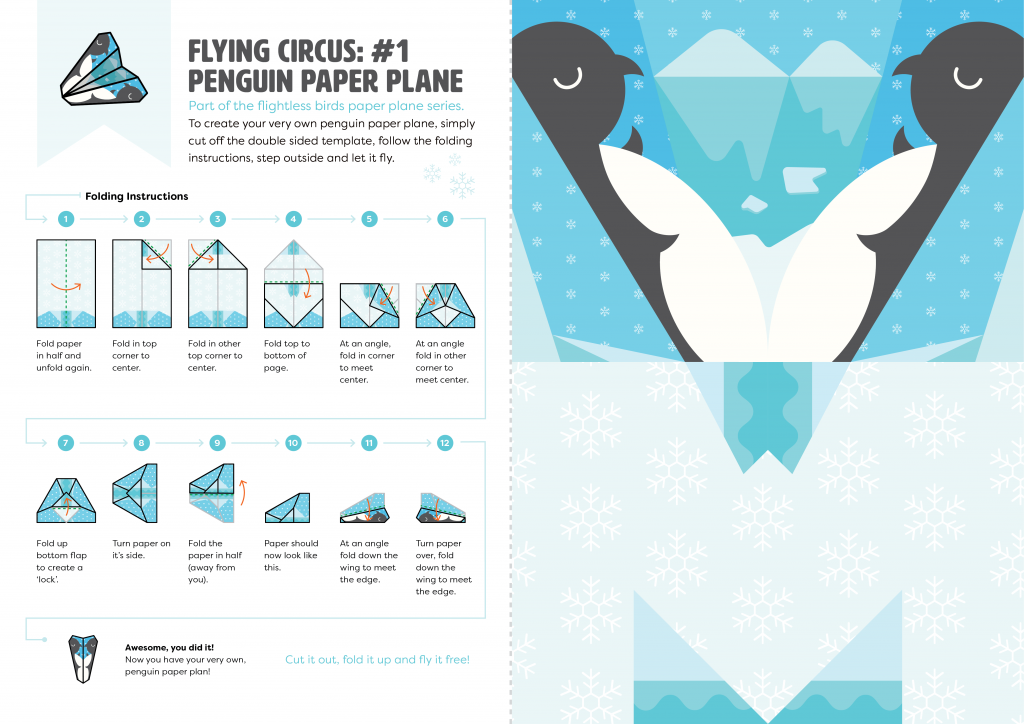 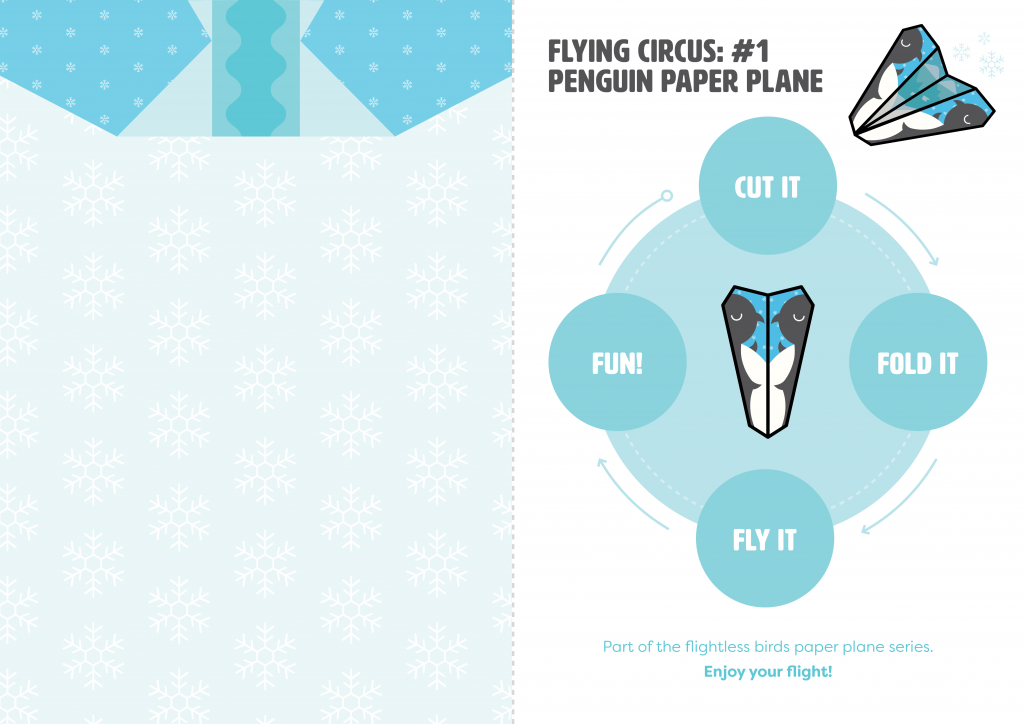 A note on Typography

In the layouts created so far I have used typefaces that I like already. I plane to explore my options a bit further. The two fonts that I have used in the examples are HWT Artz (for heading back page circle sections) and Filson Soft for body text and all other sections. I chose those two because I liked them and thought that they had a good contrast with the bold uppercase heading and the lighter, rounded typeface. I feel it’s important that the typefaces that are eventually used do convey a lighthearted/fun theme, to make sure that the main aspects of the simplicity of the design are also felt. For example, using a monotype or sans serif would probably not work so well.

Further refinement of plane & A3 #2

After looking at the design of the plane for some time. I began to feel that the centre section (or that which is inside the plane when folded) was not as geometric as I would like, and a little bit boring. I decided to use shapes that were positioned more precisely and give more interest when opened slightly. The back of the design remained the same as previously shown. 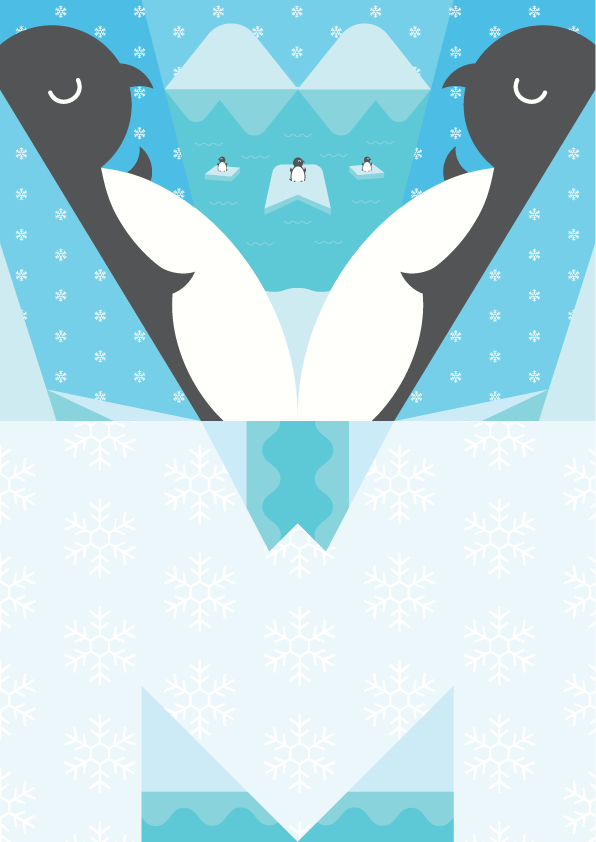 In an effort to simplify what I was doing and to reduce the number of layers and elements, I had decided to use the Shape Building Tool to make each part broken into unique shapes. However, as part of the requirement of the brief, I should be using clipping masks. At first, my thoughts were that they could achieve the same results. However, the more I thought about it, the more I understood why a clipping mask is important and useful. While having the shapes all cut into their positions that allow the design to essentially look the same, if I decided to move or rotate an element, it would mean that there would be an impact to the remainder of the design and gaps visible. If I have a clipping mask instead, I could rotate a layer or the whole thing (minus clipping mask) and everything would still be locked in the same area. The Shape Building Tool is useful to create shapes, but clipping masks obviously have many advantages.

I spend some time looking at the fonts and typefaces available for desktop use on Typekit. I was particularly drawn to a number of rounded or slighted rounded designs. However, in the end, I felt like the two that I had chosen previously (HWT Artz and Filson Soft) were working. When working on the A3 document in InDesign I created character styles for each usage of text, so that I could easily change the typeface and ensure a continuity across all type.

The A3 sheet has been updated. I am going to seek feedback on which may be preferred and make sure my design is still allowed with the small changes to the centre elements. 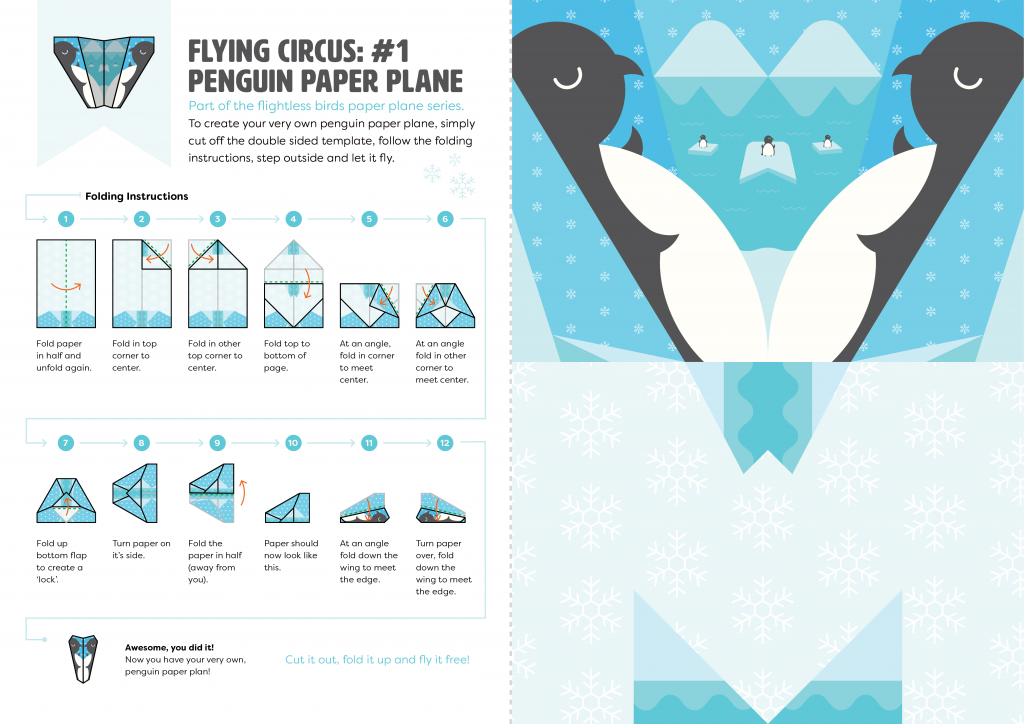 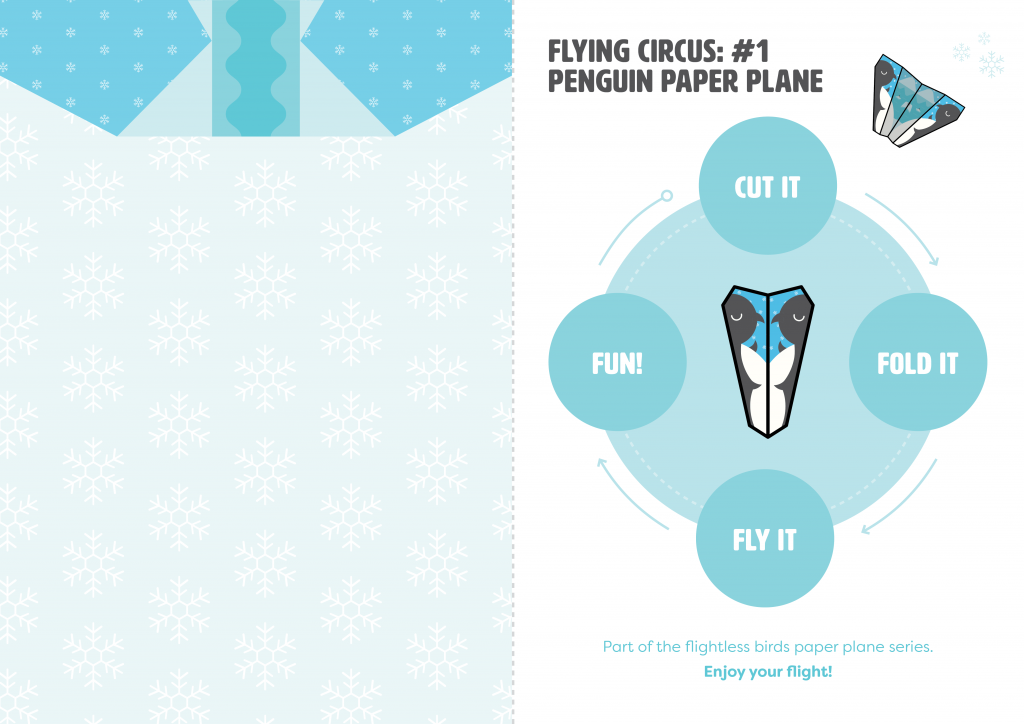 Because I had updated the design of the plane, I made sure to do a test print. I felt that it did look a lot better on paper, because the objects lined up and created a much more interesting effect. 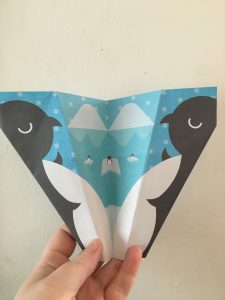 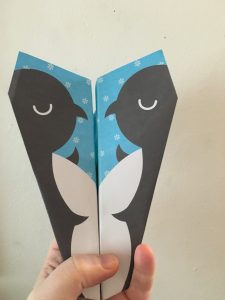 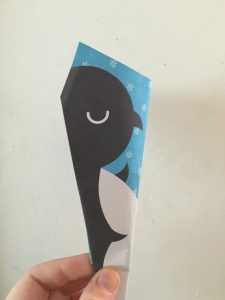 Because I have been busy with refining the design of my plane, there is one major part of the project that I have not addressed properly. The design proposal. Logically, this should have been finalised earlier in the process. I had created a brief ideation in week 2, and discussed what the plane was about in the coming weeks, but never actually took the time to write a complete design proposal. Ooops.

What is a design proposal?

If I am going to do this right, I need to understand what a design proposal is and how it can be written effectively. Galloway (2015) writes that a design proposal “clarifies and establishes the roles and goals of the project”. Which makes sense. You want to be able to clearly present the purpose and intention of the design. In the case of the paper plane design, the proposal may not be something that the potential audience sees on the actual A3 sheet, but it does provide clarity both to myself and those that view and mark the project. It also allows for all of the considerations I have had to be combined, so that it’s clear, I didn’t just think, ‘oh penguins’.

How do I write a design proposal?

From the few examples I have seen of past student work for this project, I do not believe we have to write a traditional proposal with full details (broken into sections), but provide more of an overview or brief with a general introduction for the project. Cowan (2013) shares examples of information that should be included in a proposal and in particular relevance writes “Once you’ve carried out your research, write a concise yet powerful ‘project overview’. This is a chance to really demonstrate your understanding of the project and your passion for helping them to achieve their goals. This should feature at the very start, and provide a summary of all the detail to follow.”

I discovered the following articles that discussed writing a design proposal.

I did look at many more, but thought I would include these for quick reference.

While learning about how to write one does provide many pieces of information, sometimes seeing a template or example can also be a great help. I discovered the following design proposal templates.

Note: I would not use a template for my project, I am only viewing them as a general guide.

Creating my own design proposal

When writing my proposal I should consider; what my theme is about, how each plane is able to translate the message of the theme, and together form a complete set.

Cowan, K 2013, How to write a killer proposal when you freelance, viewed 17 December 2016, <http://www.creativeboom.com/tips/how-to-write-a-killer-proposal/>.

DeFelice, K 2015, Writing an Effective Design Brief: Awesome Examples And a Free Template To Get You Started, viewed 17 December 2016, <https://designschool.canva.com/blog/effective-design-brief/>.

Galloway, B 2015, How To Write a Proposal and Win More Clients, viewed 17 December 2016, <http://yourfreelancecareer.com/how-to-write-a-proposal-and-win-more-clients/>.

Heaton, S 2016, How to Write a Design Brief to Keep Your Web Design Projects On Track, viewed 17 December 2016, <https://www.shopify.com.au/partners/blog/100022086-how-to-write-a-design-brief-to-keep-your-web-design-projects-on-track>.