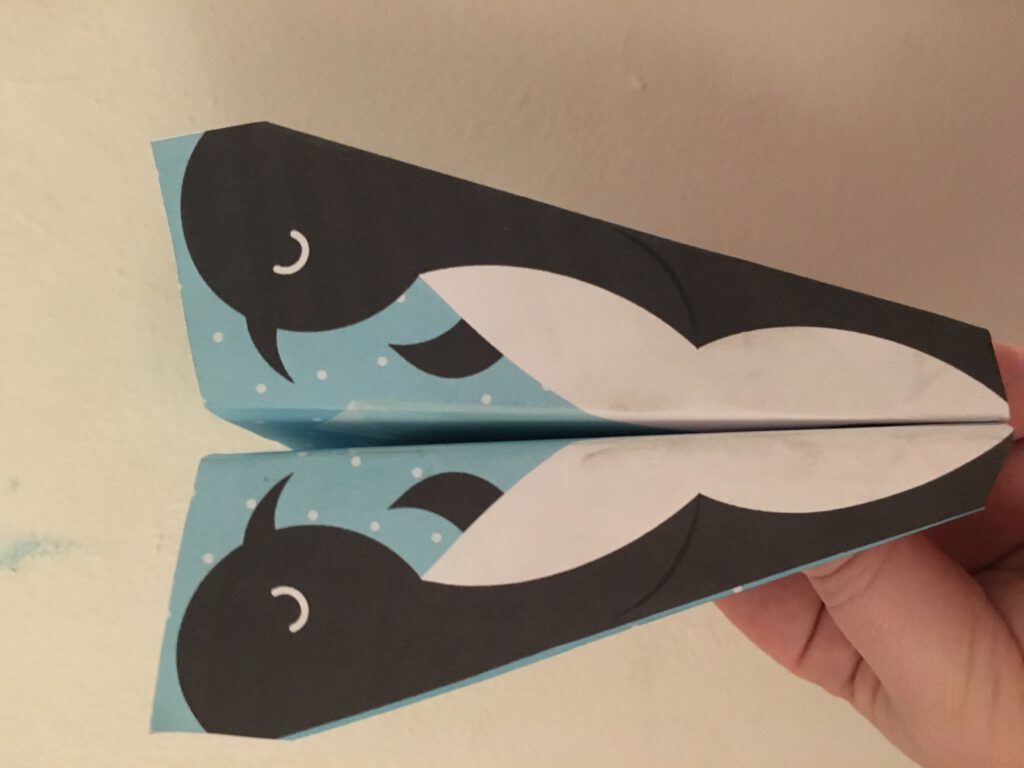 This is an on going post for Digital Design, week 5. I will post my progress throughout the week with the required activities.

This week I will be focussed on refining my design for plane one, of my theme Flightless Birds. Plane one features 2 penguins on the front of the paper plane, with a pattern on the back that features penguin feathers.

Last week, I attempted to recreate a penguin from a sketch. This was a very rough attempt and I wasn’t happy with the overall feeling and smoothness of the design. Before I begin to scan and trace the prototype design, I decided to practice recreating the penguin. This time I made sure that there were curves and a greater level of accuracy. I used the circle, square and rectangle shapes to form the penguin, instead of the pen or pencil tool.

I folded a paper plane and sketched directly onto surfaces. After viewing current and past student work, I realised that my concept may be too basic and needs more visual elements to make an interesting design. I decided to draw inspiration from the natural habitat of many penguins and use arctic scenes, with icebergs in the background. The top surface of the plane is just the penguins, when folded out we see icebergs and water. This is carried over to the underside of the plane, where icebergs run along the side, and snow sits above.

Using Adobe Illustrator I began by creating a penguin. I created a video where I recorded my screen during this process.

Once the penguin was complete, I decided that I wanted to work with the sections of the actual plane layout. Using the prototype with the sketch, I measured all areas of the plane and created a digital prototype in Adobe Illustrator.

I than converted the lines into shapes, where I could create a clipping mask for each shape, so that the elements I created could easily be inside each section. The colours that were used, were just a draft or estimation of the types of tones that may be used.

Once I had the clipping masks created, I began by placing the penguins inside the correct areas. What I found was that I did have to create additional space on the bottom of each penguin, and decided to add the photo, to follow the scan more closely.

After this I created the background elements, that included the icebergs and also adding some shadows on them, to represent that they are slightly submerged in water. I also created a circle, and using the pattern tool, created a snow pattern that had space around each circle and used a hexagonal arrangement. This was easily applied to areas where I wanted to have the snow.

Once I had finished the recreation of the scan, I decided to print it out. I currently only have an A4 printer, and it does not allow you to print beyond the margins. So I reduced the printing size to scale 80% and used a metal ruler and scalpel to cute off the bored when printed. It was not 100% accurate, but it was very interesting to see the design come to life.

When I did the test print and viewed the completed design, I decided that I did want to make a few changes, to give the design a bit more personality. I was quite happy with the front of the plane, but wanted to change the bottom, particlarly how the plane is viewed on the side. At the moment, while the design makes sense in the digital template, it does not translate clearly. Instead of having a number of small icebergs, it would be a lot better to have two large ones on either side, that follow with the folds of the plane.

I also thought that it would be graphically more pleasing to create snow flakes for the pattern, rather than just circles. This should add another level of detail, and hopefully make the final design work well.

In the next stage, I will explore the changes I have discussed. ?

Refinement of Plane One

Previously, in the scan and trace, I created my first draft of the plane. I mentioned that I wanted to make improvements to the design along the side of the plane, as well as the snowflakes.

I began by revisiting my sketched prototype. Using a larger marker, I coloured in the sections that would be changed, to represent the large iceberg (instead of small ones). I once again scanned the document, and placed this in my Adobe Illustrator.

For greater accuracy, I measured the sections on the paper and used those measurements to add and modify colours and elements within the previous template created in Adobe Illustrator (I did duplicate the previous version, so it could be kept for reference as well).

Previously, I mentioned that I wanted to modify the snow pattern that is featured on the plane in the sky elements. It was, circles placed on a blue background, and thought it would be more interesting to look at a snow flake.

I began by looking for visual references and inspiration, so that I would be able to recreate a snowflake that correctly resembled the real thing.

Next I used my bank pad to quickly sketch out a number of different styles of snow flakes and scanned this.

I placed the scan in Illustrator and began by using the lines and shape tools to create a snow flake. At first I was following the directions of the sketch, but realised that my examples had not correctly used even spaces between each ‘branch’ of the snow flake, and realised that I had to rotate at different intervals.

I also made a video of the creation of a snow flake, on a new document.

While doing the test print, I realised that some elements of the design had not been created correctly and did not align with each other. I also uncovered another problem…..

Huston we have a problem…

While I was doing a test print of the modified design, I realised that I had made a mistake. During my folding process, I had missed a fold that effected how the design was styled in the template, and because of this, have to revisit the process again. It’s an important lesson in making sure that you do have the folds completed correctly, before stepping forward.

Because I had made a big mistake on the previous design, and forgot a fold, I created a new sketch that made sure the correct areas had a design. In the design, I also changed where some of the icebergs (underwater) connected with each other.

I began the tracing process, by creating guidelines with the measurements of the paper plane (from the sketched template)

I continued by creating the penguin and additional elements of the design. With finally creating the snowflake pattern and applying it as a duplicated background layer to areas that would have that pattern.

I printed several tests of the first trace, and found that it had a number of inconsistencies with the icebergs underwater. Particlarly where the points and curves were lining up with each other. I decided that I also wanted the elements to have a much more regulated and curved appearance, so created a curved zigzag line and used the rectangle and shape building tool to create an element that could be placed in the clipping masks.

Because my printer is only an A4 and when trying to print borderless at the standard size, it would remove sections of the design, I had to scale the design to 80% and make sure the position was centered. This made the test of the design smaller, however it did allow me to make sure that everything was fitting together correctly.

There is a large area of the design of the plane (when flat) that has no colour and is not seen when the plane is folded. Rather than leaving this completely blank, I decided to play around with a few different ideas. I have shown examples of the front only (with the background matching each style).

I found that I particularly like, the larger snow flakes on the darker colour (that matches the penguins). It has a strong contrast compared to the lighter blues.

A Few Thoughts So far

I thought I would take a moment, just to capture some of my thoughts on this project so far. I have found that it requires a combination of accuracy with measurements in calculating the sections of the design, as well as good problem solving skills. You have to be consistant in trying to ensure that all parts, when folded, align correctly with each other, and make sure there is a consistency within the design. I found it more challenging on the side of the plane, where there are numerous folds of paper that intersect. I also had to consider how some elements of the design had to be enlarged, because there placement when folded, was not correct. Because I have several patterns that flow along the side (the solid line of the water and curves of the icebergs) I had to pay very close attention there. It required a lot of trial and error, revisiting the measurements and considering ways that I could solve the problem.

To begin the visual research for the A3 Layout, I looked at examples of paper plane templates, origami sheets, instruction manuals and similar design examples. I searched for inspiration that included headings, diagrams and ideas for structure.

I created a number of rough sketches in my bank pad. I wanted to explore a number of different ideas for the presentation and structure of the design. I want to make sure there is logical order, hierarchy and a connection to the theme itself. I must insure that all the requirements are included and that it can be relatable and understood by anyone (while also complying with good design standards).

My plane type that I have selected is a Nakamura Lock. I created some draft sketches and looked at inspiration of diagrams already created, of the folds required to replicate the design. Besides considering the clarity of the folds, I have also thought about the scale of the diagram, which should contain accurate measurements, but at a reduced scale.

After I had created my rough sketches and looked at examples of similar folding instructions, I began to create the diagrams in Illustrator. Throughout the process I also used a copy of the actual plane, and made sure I was following the steps required. This took a lot longer than I had planned. I had a few struggles with trying to get angles and lines to align correctly, and had to consider how different corners interacted with each other. In the end, I got pretty close. I did two versions. One is an outline, and the other is a fill with the actual design of the plane. I thought that this may make it easier to follow the instructions. A few things that I found helpful during this was: using a grid and snapping to grid, creating slightly curved corners and clipping masks for the plane design. I tried to keep all the elements in complete shapes, however when I had a section where lines were intersecting and interrupting the clarity I used the scissors to sever the un-deeded points and to move or delete anchor points.

I ran out of time this week, but made a few very rough drafts of the A3 layout. I plan to pay more attention to this next week, when I put it all together.