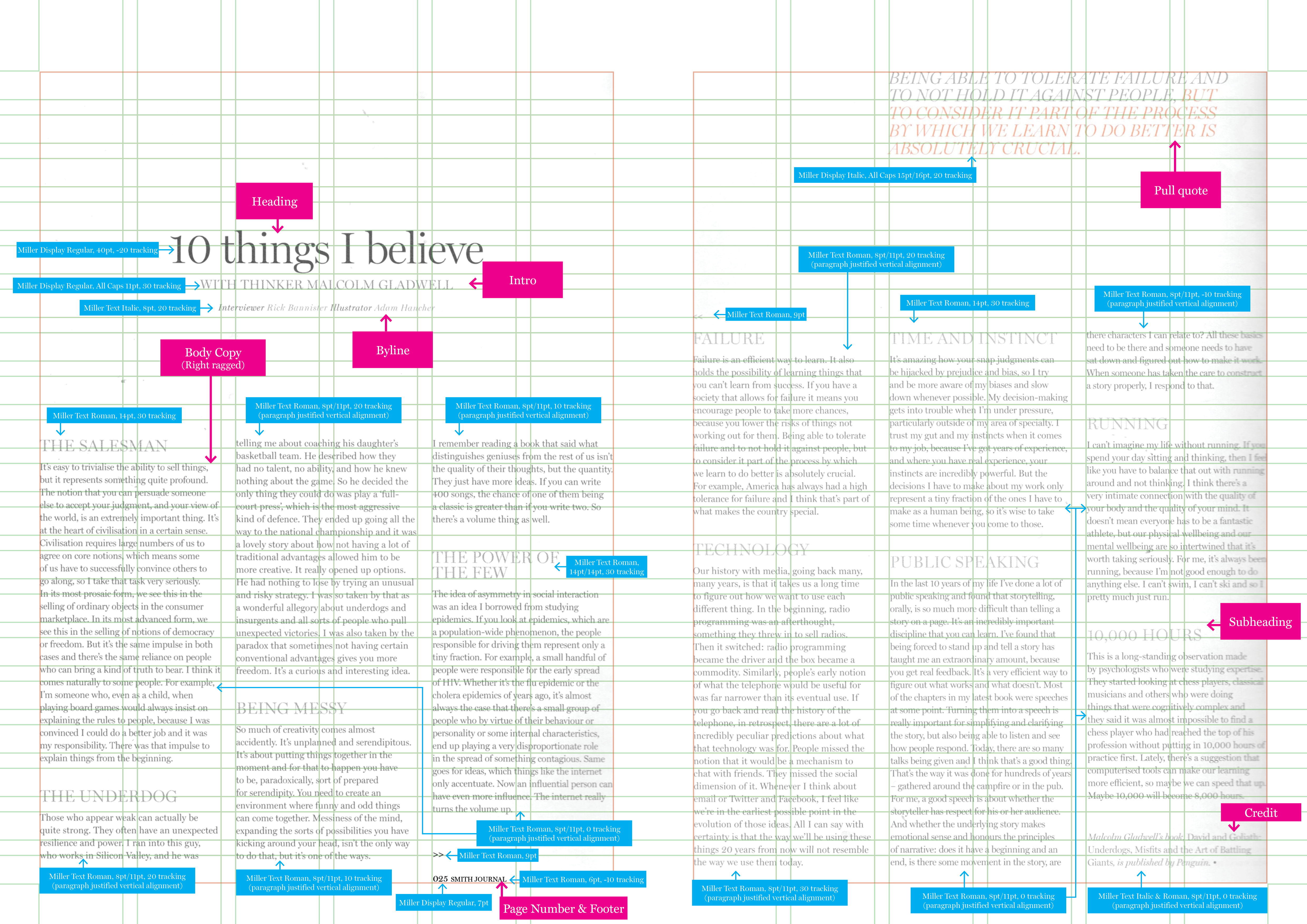 This project requires you to typeset and recreate a page of copy that faithfully reflects an existing page layout.

I scanned a selection of books and magazines and received approval from my teacher to use a scanned article from Smith Journal (Volume 10, Autumn 2014). 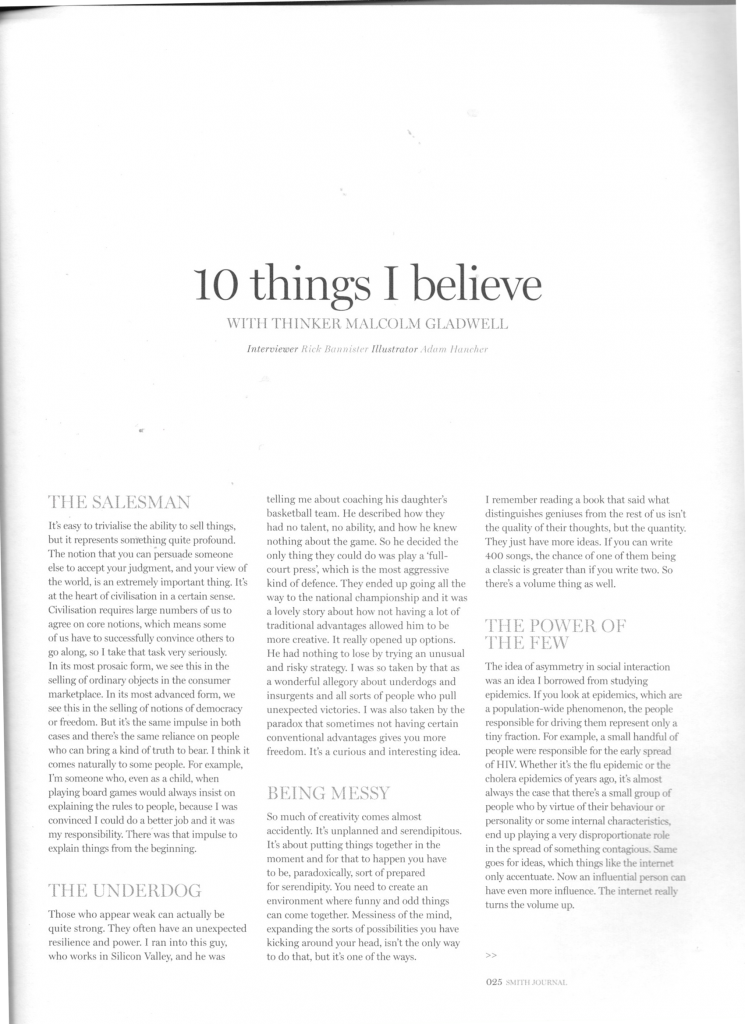 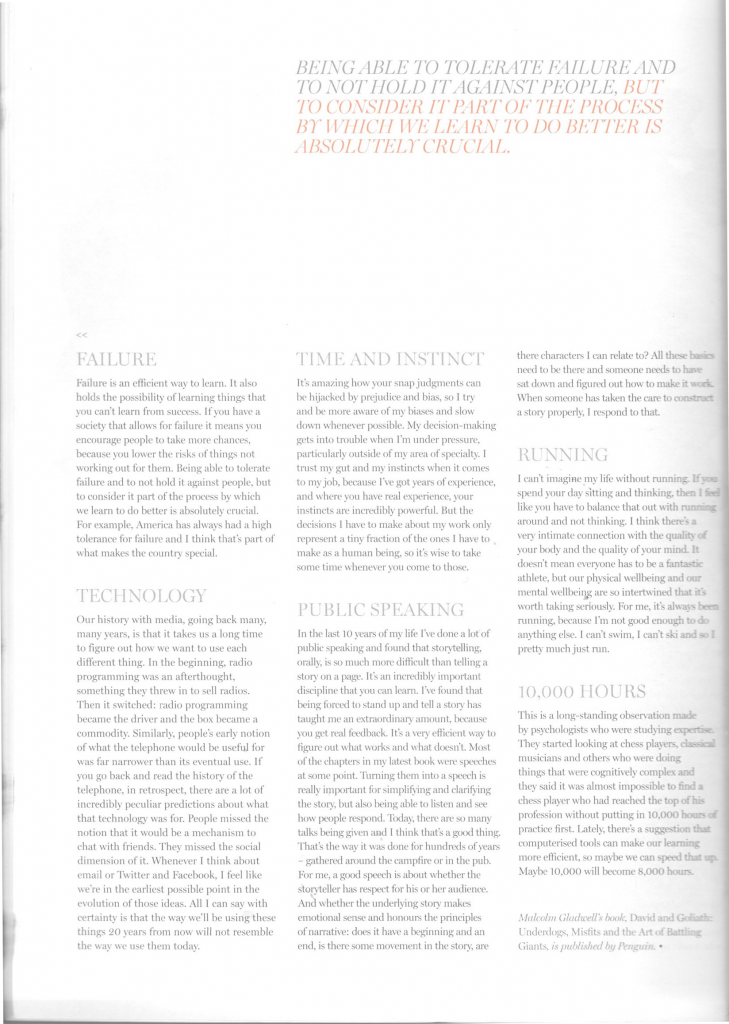 I particularly like this layout example because it has the use of many typographic hierarchy elements (such as heading, pull quote, body copy and more). I think it would also fit in well with the example text we are required to use, because there are many subheadings.

I began this process by importing the scanned layout into an InDesign document. I began by examining the text itself and could identify the employment of a serif, which would enable me to narrow down the search a little bit. I used the website Fonts In Use to search for many popular typefaces used in magazine publications. I also examined typefaces on Typekit and Fonts.com. I was having a bit of trouble trying to identify which typeface was being used, especially with the particular curvature of the letters. I used the website Identifont to enter information about the body text typeface (It’s important to note, that I wasn’t 100% if the same typeface or font family was used across the layout spread and was examining different sections). After entering as much information as I could about different letters, I was given 45 potential matches. I looked at each one and found that Miller Text appeared to be the correct version. To make sure that it was correct, I used a version of Miller Text and placed it over the scanned text in my InDesign document. It took some time to try and get the sizes correct, but found that there were many parts that matched. I than began trying to find the typeface used in the other elements, and did not realise until examining the document again that they were all very similar. I discovered that they were mostly all part of the Miller family, but some were regular, italic, roman or from Miller Display. 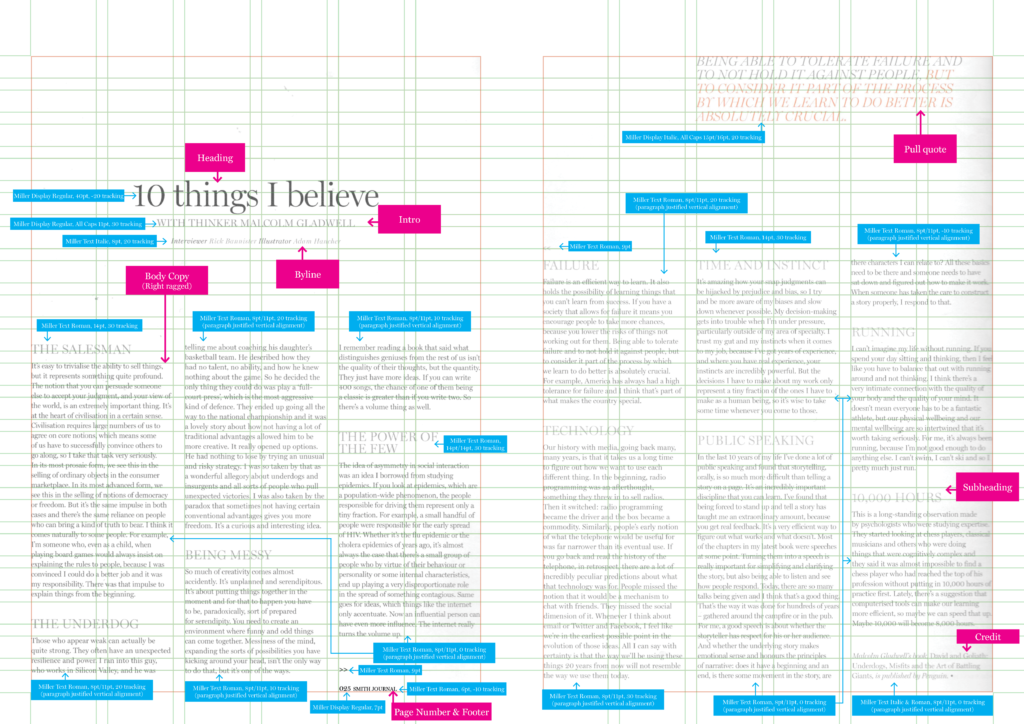 During this stage I did also label the point sizes of the typeface, and the different sections. It allowed me to try and understand the document in a clearer way. What I found particularly challenging was trying to word out the accurate leading or spacing between the lines. It seemed that a lot of the body text lines were using 11pt, but that it changed over time. After trying various sizes, I thought to dry adjusting the vertical alignment and found that it was using a vertical justification. I also found that some paragraphs appeared to have altering tracking. With smaller paragraphs using more tracking and larger ones using smaller or no tracking. I assume that this was to allow the appearance of a greater continuity of space within the layout spread.

One particular issue that I did face, was with the margins. The scan page of the original layout is on a page that is larger than an A4 size. In the document that was imported into InDesign, I reduced the margin sizes to try and allow for the content to fit onto the actual page. This will be something I need to clarify with my teacher.

After receiving some feedback about the way that I had setup the grid and the use of a modular system, I should have used a multicolumn grid. So I have revised the setup. 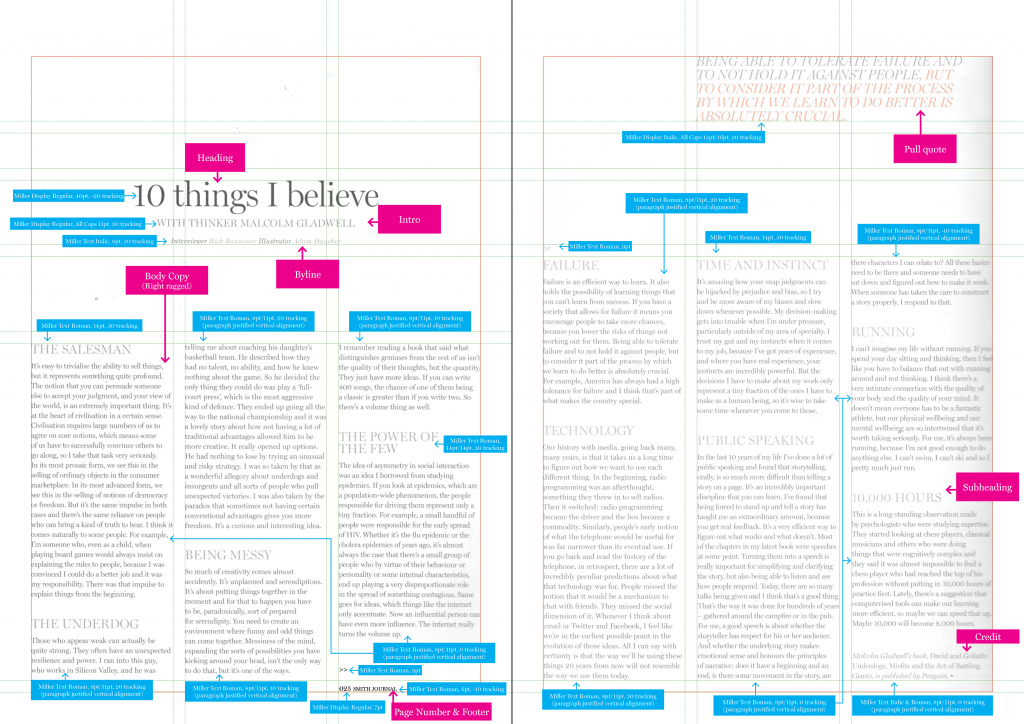 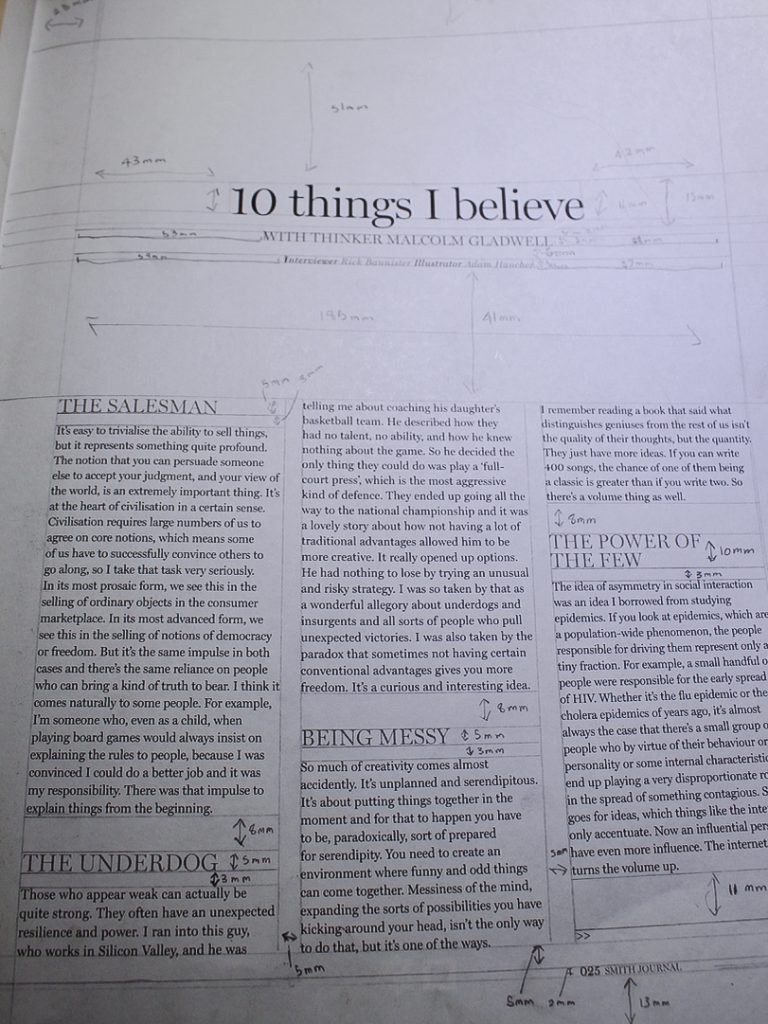 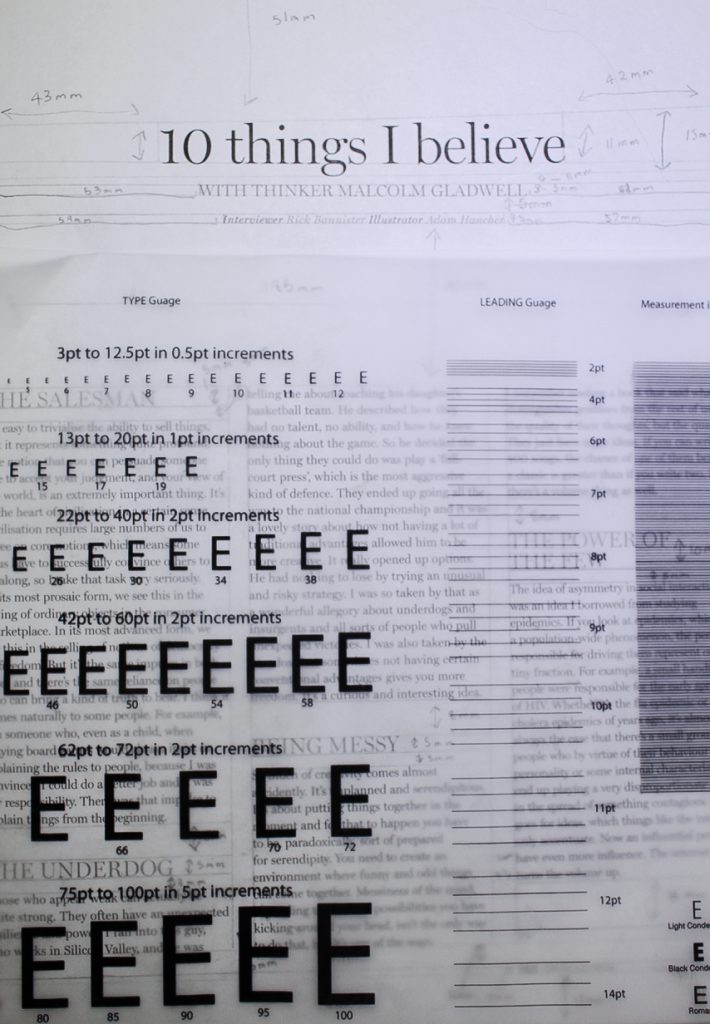 I used a ruler to first measure the sections of the document and the downloaded type gauge to to get as accurate measurement of the type size. I found that some of my original measurements were incorrect. 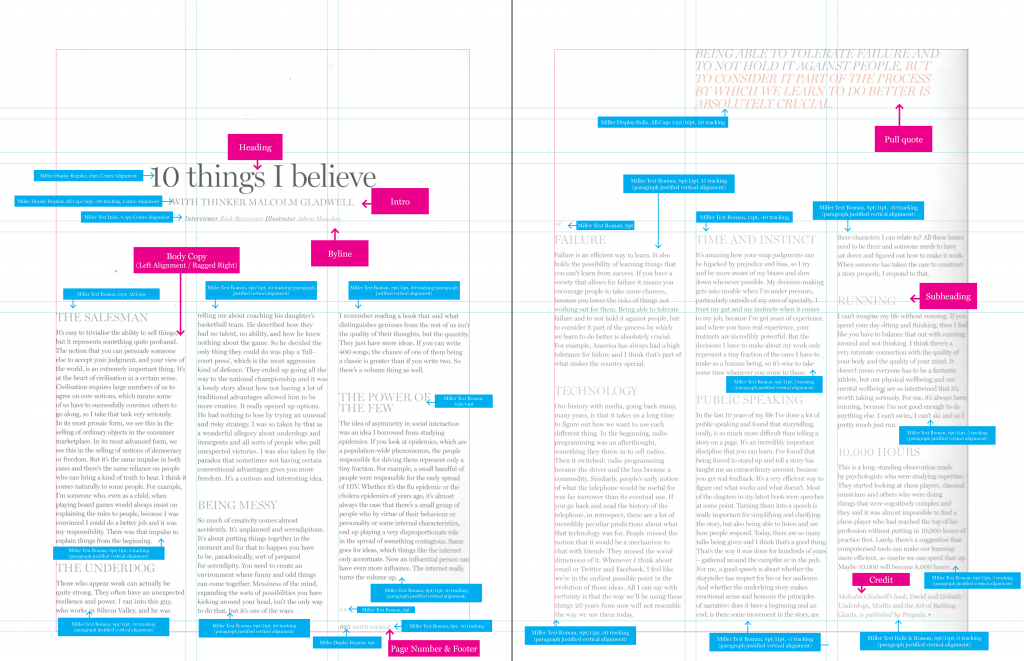 I updated my document template to relabel the typefaces and point sizes.

I than compared the original scan in the document and the version using the digital text using the typefaces and sizes I thought were used. 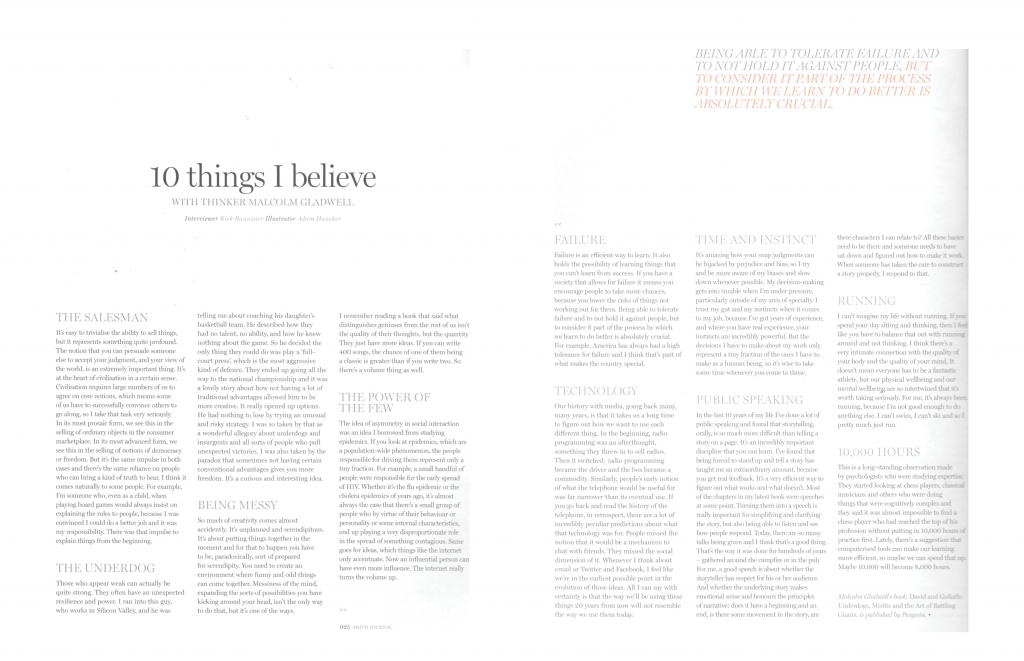 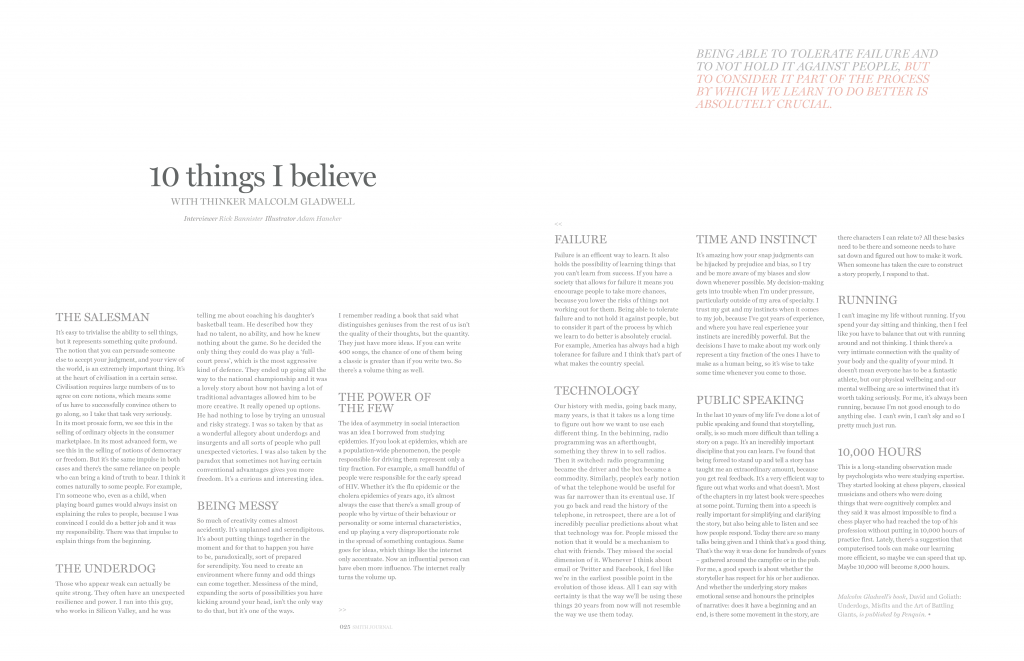 I than decided to print the digital text version I had created of the first page onto a transparent sheet of paper, so I could overlay it on the original to get a better examination. 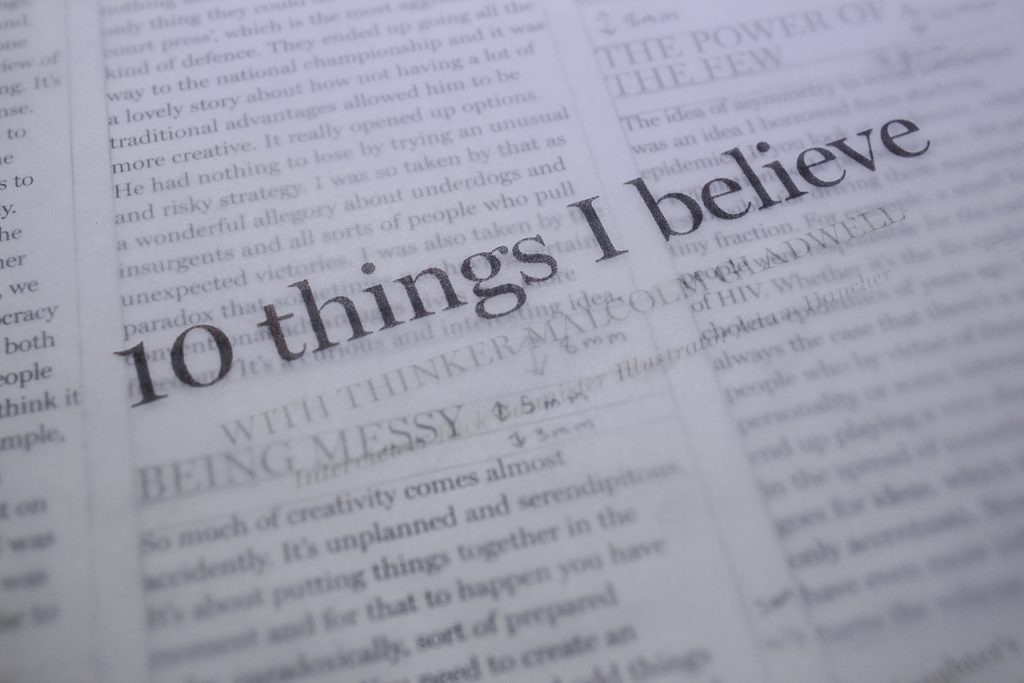 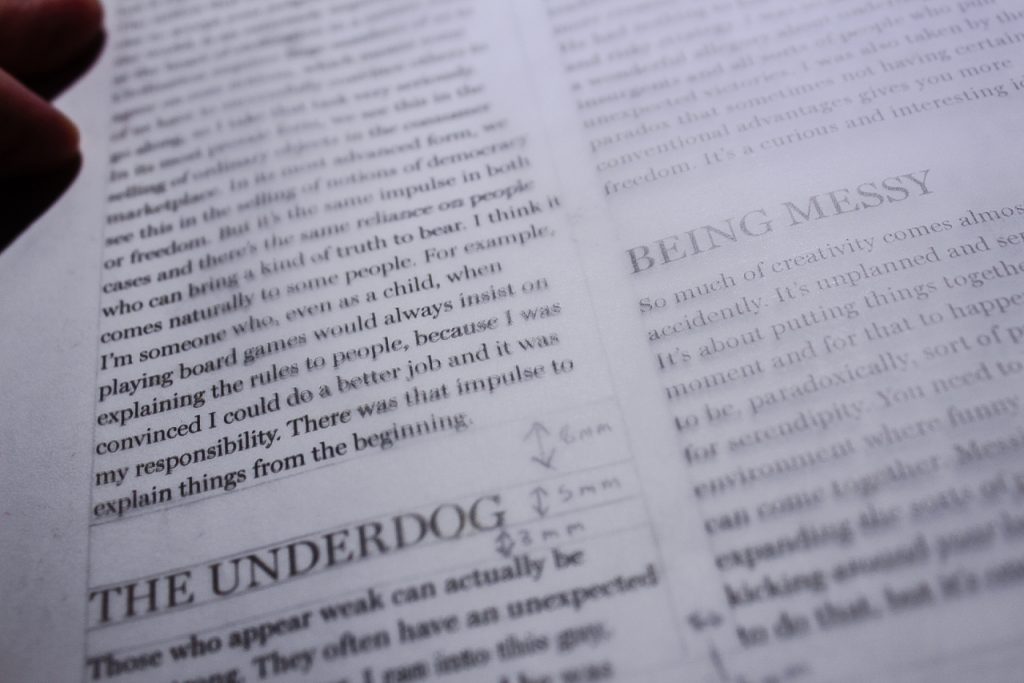 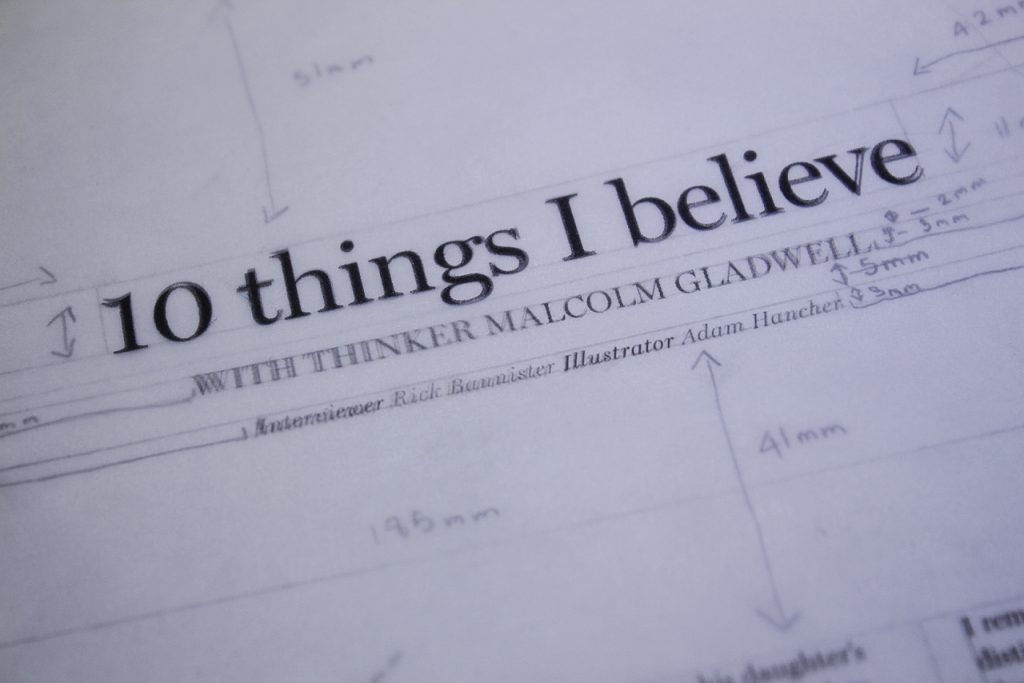 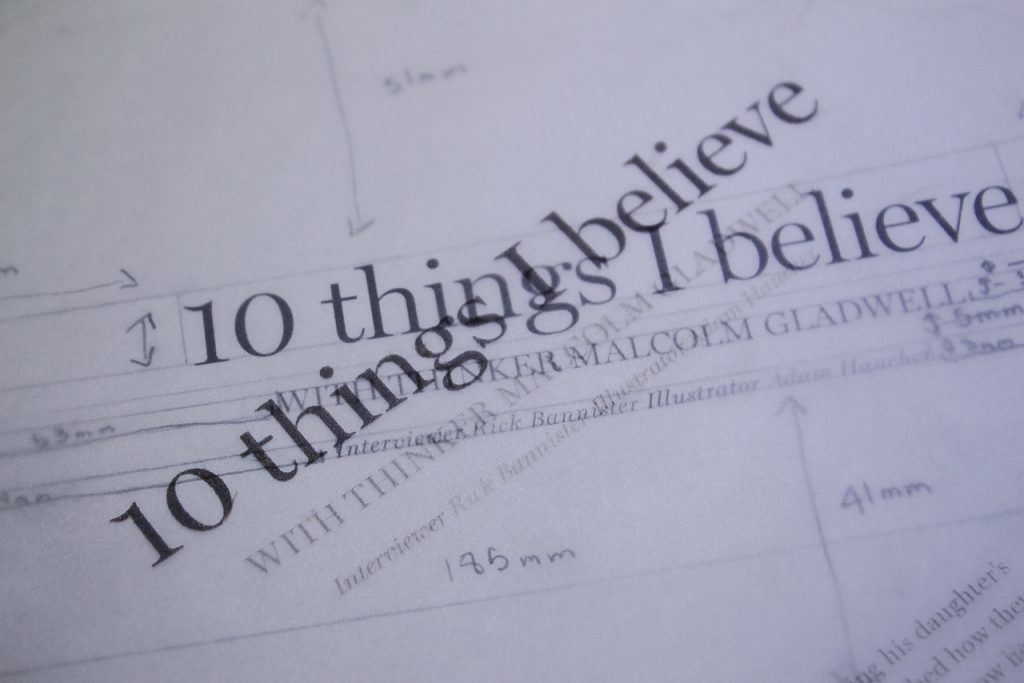 I think that I quite close to having the correct typefaces and sizes, however the weight of the heading and subheadings does not seem 100% accurate, so I will have to try some different typefaces within the Miller Text and Miller Display fonts. I also have some concerns about the paragraphs themselves. I thought that logically they would all be laid out in one text block split into paragraphs. But it does appear that the vertical justification does dash this thought, because when attempting to place them all in the same text block and use that alignment it was far from correct, no matter how hard I tried adjusting line heights and tracking. I could possibly place the subheading in the same text block as one paragraph and have indents to make the actual setup more harmonious, because I can’t imagine the actual design structure would be so split… but I could be wrong.