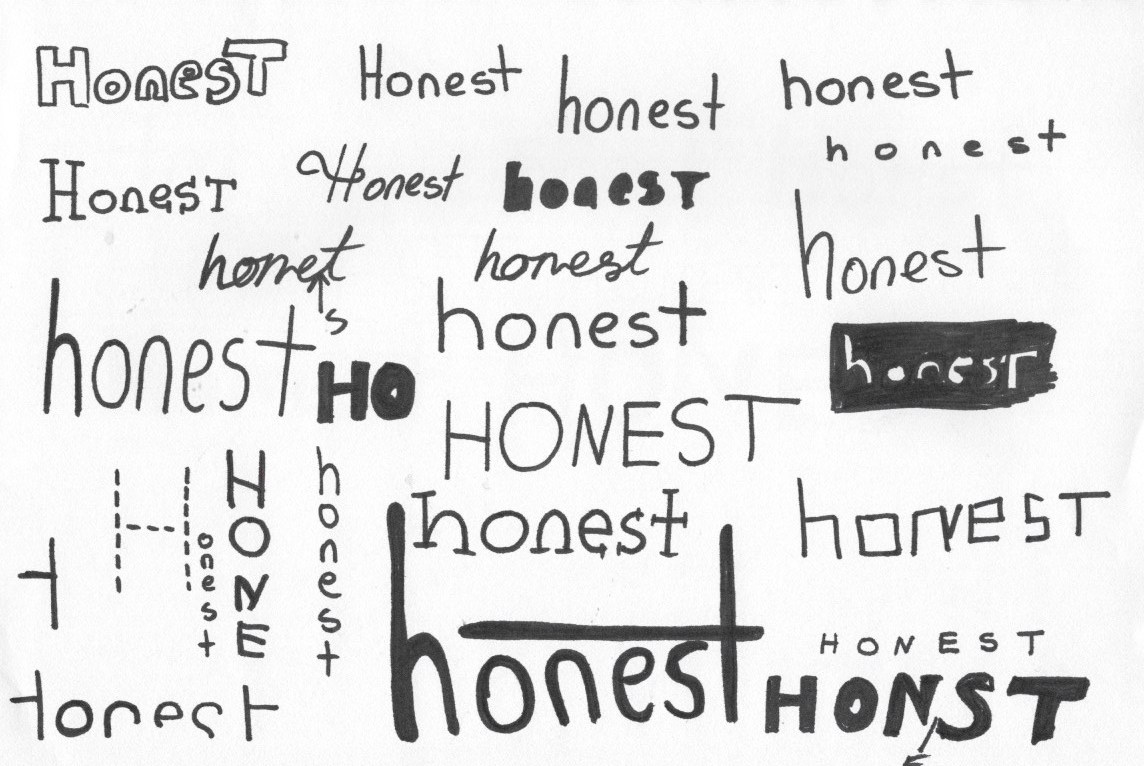 This post is a collection of my thoughts and ideas that have been assembled as part of my project requirement. I will share my process on the way that I explore my allowed word (honest) and material (paper), find inspiration and present potential ideas.

This post is a work in progress and I will continue to update it within week 1.

This assessment task requires you to create original graphic forms – of letters, of a word – to tell a story. The outcome is to be highly resolved both conceptually and technically.

My word is honest and my material is paper.

To begin the process of exploration into understanding both my word (honest) and material (paper) I want to look at both in greater detail. I have several questions that I have asked myself before I begin. I have asked these questions because I believe to be able to really connect with this project, I have to have an extended knowledge of the meaning and structure behind them.

There are also questions that I need to make sure that I answer to connect the project to the core learning and development of my understanding of typography.

Most importantly, I must make my answers relevant to the requirements of the weekly brief.

Honest is defined as ‘Free of deceit; truthful and sincere’, ‘Morally correct or virtuous’ or ‘(Of an action) done with good intentions even if unsuccessful or misguided’ (Oxford University Press 2016a).

Honest is derived from ‘Old French honeste from Latin honestus, a derivative of honōs, from which English gets honour. The new Latin noun formed from honestus was… honestitās, literally ‘honestness’, recorded only in the later contracted form honestās. From it English acquired honesty…, whose application to plants of the genus Lunaria was inspired by their nearly transparent seed-pods’ (Ayto 2005, p. 274)

In a study on Intrinsic honesty and the prevalence of rule violations across societies, Gächter & Schulz (2016) write “Generally, processes of conformist transmission of values, beliefs and experiences influence individuals strongly and thereby can produce differences between social groups’ explaining that If cheating is pervasive in society and goes often unpunished, then people might view dishonesty in certain everyday affairs as justifiable without jeopardising their self-concept of being honest.’ and concluding with ‘Taken together, our results suggest that institutions and cultural values influence PRV, which, through various theoretically predicted and experimentally tested pathways…, impact on people’s intrinsic honesty and rule following. Our experiments from around the globe also provide support for arguments that for many people lying is psychologically costly…. More specifically, theories of honesty posit that many people are either honest, or (self-deceptively…) bend rules or lie gradually to an extent that is compatible with maintaining an honest self-image…. Evidence for lying aversion and honest self-concepts has been mostly confined to western societies with low PRV values…. Our expanded scope of societies therefore provides important support and qualifications for the generalizability of these theories—people benchmark their justifiable dishonesty with the extent of dishonesty they see in their societal environment.’

When considering honesty in a design context I am drawn to the theories of modern design and the manifesto on ‘Good Design’ that focussed on transforming the way that design functioned and even described one of the values of Good Design as honest; “Good design is honest… It does not make a product more innovative, powerful or valuable than it really is. It does not attempt to manipulate the consumer with promises that cannot be kept.” (Vitsœ 2016)

There is the element of honesty in design by the designer, their personality and reputation and if you can trust the work of the designer to produce an honest work. While the honesty of the target audience would also play a role in the reception of the work.

Paper is a noun defined as ‘Material manufactured in thin sheets from the pulp of wood or other fibrous substances, used for writing, drawing, or printing on, or as wrapping material’ (Oxford University Press 2016c).

The invention and production of paper has a very long and rich history, with some of the earliest pieces dating around 140–87 BCE in Han dynasty, China (Weerdt 2011). Throughout the development of the world and inventions of the paper mill, printing press and books (Smith 2011), the demand for paper continued to expand, and it was during the industrial revolutions and the use of machine operation that the production expanded enormously (Hull 2011).

The following view shows how paper is made with the use of machine production (From Tree To Paper | How It’s Made 2013).

Interestingly, Bird (2015) writes that “The process of making paper by hand has changed little since it was first developed. It is made from vegetal fibers derived from such sources as wood pulp or textiles. The fibers are mixed with water and allowed to dry, forming flat sheets. The sheets may be coated with a sealant such as glue size.”

With a increased use in the production and demand for printed materials, the process of paper making has an impact on the environment. Smith (2011) writes that “The ecological damage created by papermaking is alarming. The production of paper products requires too many toxic chemicals, is energy intensive, and impacts water supplies. The waste created by papermaking creates massive amounts of toxins that are released into the air, water, and land, which makes the paper industry a leading polluter in the US. Greenhouse gas emissions further add to the predicament. With all of the ecological devastation, it is hard to comprehend why government, business and society have largely ignored the problem.” Smith also suggests “Recycling is a method that can be employed for short-term ecological gains, but decreasing the amount of paper used is key to any solution.”

Now that I have investigated both the word (honest) and the material (paper) I need to link these together and see what happens when the two cross paths.

My personal interpretation of the link between honest and paper is that they are both core or essential values, in both human and design contexts. Honesty is being truthful, not concealing the truth and paper is a mostly pure material and a foundation on which design is built (especially in a printing environment).

The meaning that is developed when these two are placed together is one I feel of purity, simplicity and the ability to acknowledge the truth of the material. I want to be open, evident and clear that my material is paper and not have this hidden under any misconception.

I see the ability to create difference and contrast in the texture and form of the material. How the letters are crafted, and the way the paper has been cut, folded or scrunched. Each will provide a unique variation on the chosen theme. I don’t think using all different contrasts would adhere to the core value, but worth experimenting with.

Edit: After creating some sketches, I found that there is also the contrast to have the word honest, displayed in a way that not all of the letter forms are appearing. This creates contrast to the actual words and the blending of the background. If displayed in a way that the parts of the type are clear, you are still able to understand the word that appears. There is an irony in this form. Even though it isn’t familiar to the original thoughts I had of staying true to the typographic form, it does have an interesting play on the use of type and transference to the background material.

I believe that there is a very important connection between both my word and material that is linked to the history of typography. Paper of course is the very obvious one and the fact that without it, the way that we would view and interact with typography would be very different or nonexistent.

Ellen Lupton (2010) writes about the connection of typography and letterforms to the origins residing in gestures, and how these influences are reflected in many evolving typefaces (even today). I find this particularly interesting and relevant, because I want my completed project to be a gesture, not just of the letter forms that are visible, but to also encapsulate the meaning behind it. Not in a obvious way, but in a way that can be felt.

To link the word honest to typography, I believe thatI should try and adhere to all the primary rules of conventions of typography. Meaning that I must make sure that the typographic colour of the completed letter forms are legible, use appropriate proportions and spacing. I believe that the decision to use a serif or sans serif will depend on the chosen theme.

I had a very limited knowledge of typography and feel that in week 1 I am slowly starting to absorb a lot of new information and techniques and try to tie them all together. There are many pieces of knowledge that I will share in my weekly recap, but most (if not all) are certainly forming the basis that this project is building from.

I have created inspiration boards on Pinterest to help collect visual ideas that I find relevant.

These are random ideas that I have thought of, that may be useful in some way. 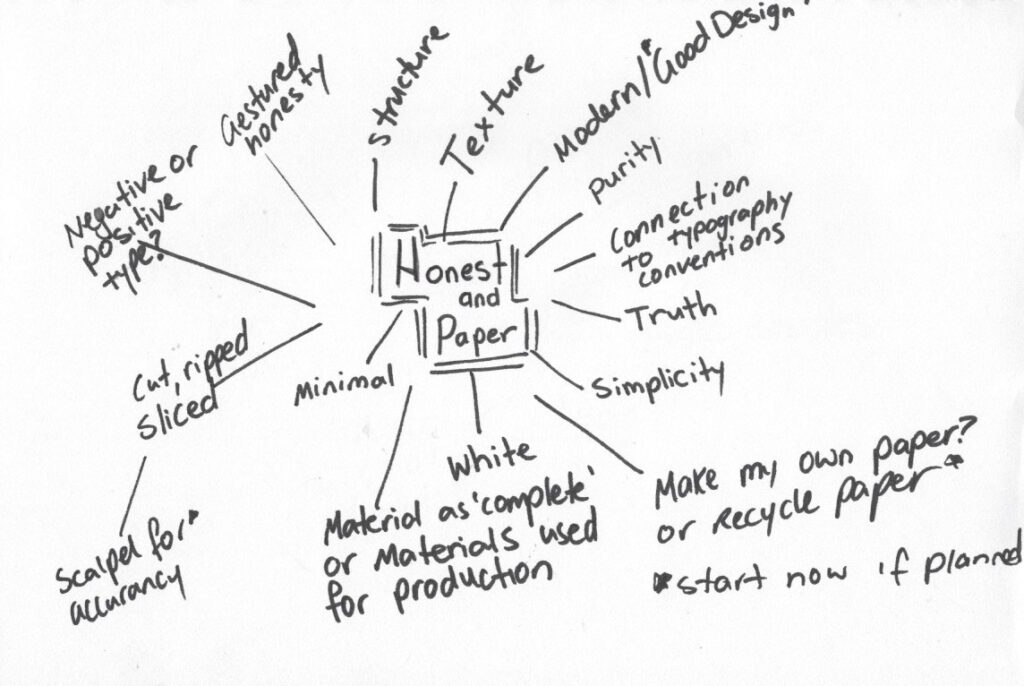 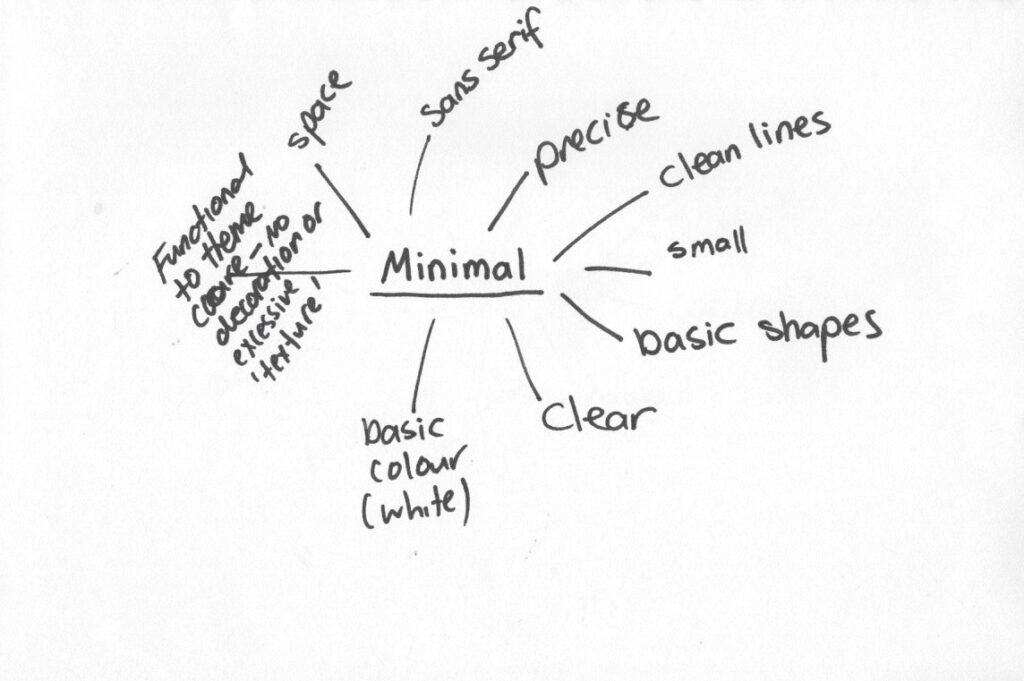 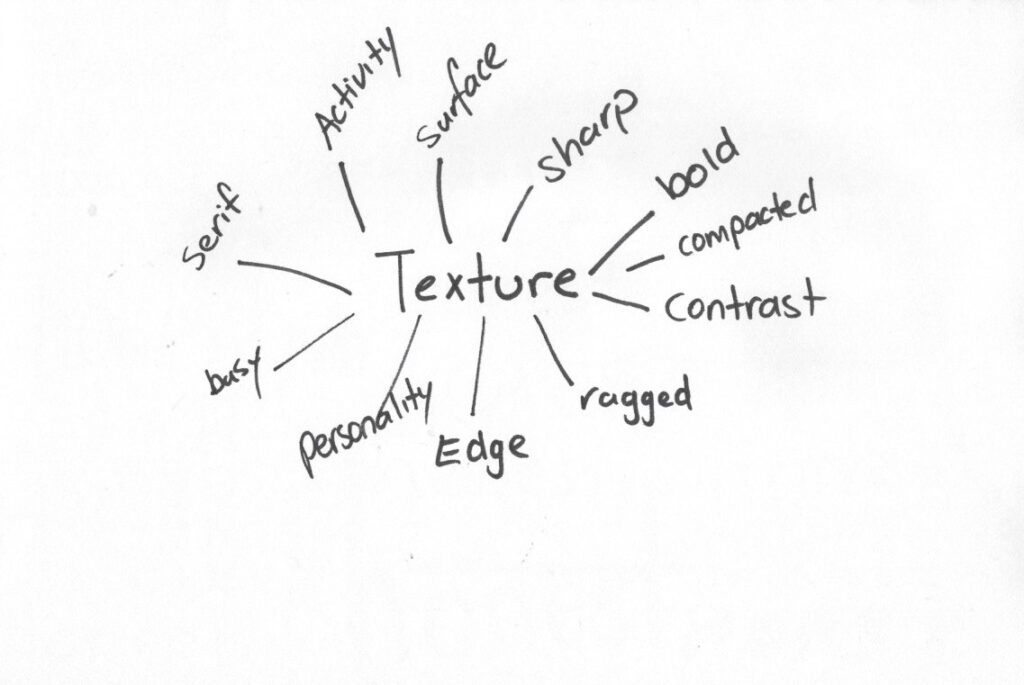 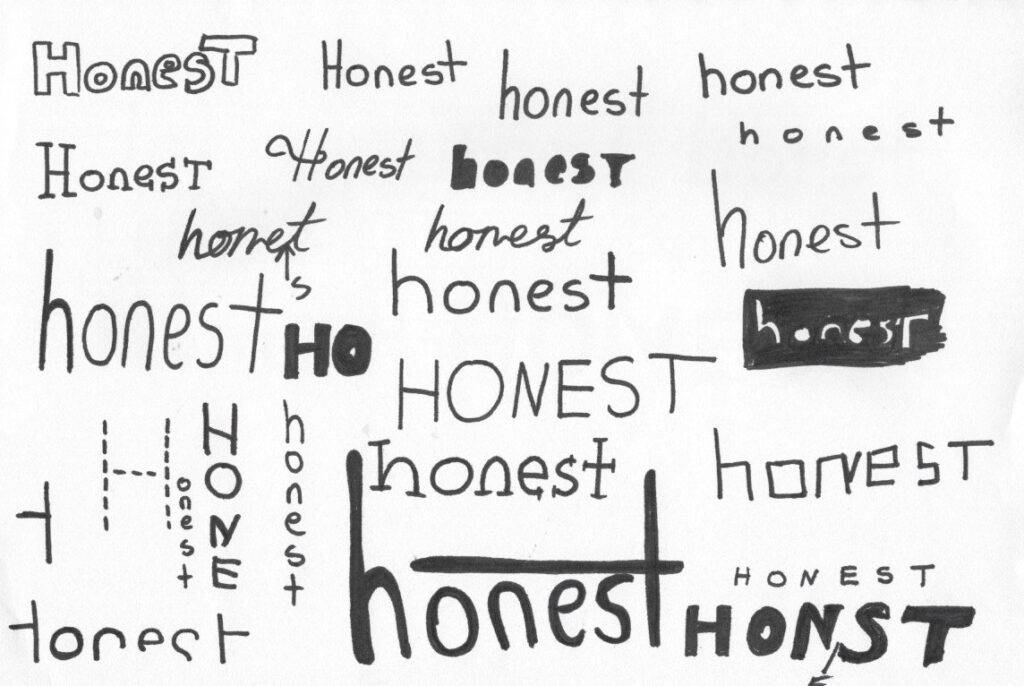 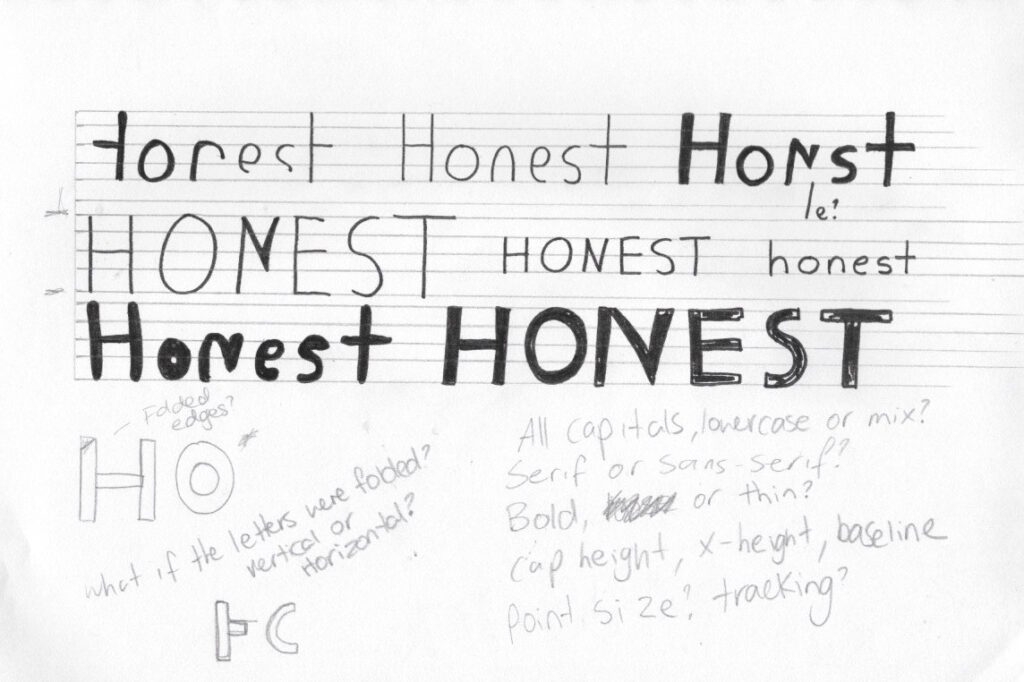 Putting it all together

Now that I have explored many aspects of the word, material, theme and potential ideas with thoughts and sketches, I need to try and put it all together so I have a more developed understanding of the direction I want to go.

How to make the letters from paper
There is such a vast way that the letters can be crafted from paper. I can narrow these down by understanding the way that I want the typeface to reflect on my word meaning and the chosen theme. The theme that I would like to work with (minimal) is discussed below. The potential ways that I can create the letters for honest could include;

There is also the important step of which kind of paper to use. Their is such a huge library of paper. Paper that is printed with lines, paper that is smooth, paper that is textured and coloured, aged paper etc. Additionally there is also the possibility of creating paper, from recycled paper or other materials. Due to the timeline I have to work with, I may only be able to use paper that I have available, in which case I want to use something that has a clean white surface (no lines), but also has the obvious appearance of paper. Ideally the use of a 100/110 gsm white paper, from a visual diary, which is crisp, but also has a subtle texture.

Working with a theme
I am particularly drawn to the theme of minimal. To create the word honest from paper, in a way that is not overly decorative, is very clear in the meaning and definition and can connect the basic principle and meaning that I am trying to convey, which is an honesty to the material and the purity of form and function.